On 9 May 2018, the body of a young black woman was discovered in the Durance River, stuck in the dam of Prelles, a small village in the municipality of Saint-Martin-de-Queyrières, downstream from Briançon in the French Hautes-Alpes.

The young woman was identified a few days later as Blessing Matthew, aged 21 and originally from Nigeria. She was last seen alive on 7 May in the village of La Vachette, 15 kilometres from the French-Italian border, when the mobile gendarmerietried to stop her and her two fellow travellers, Hervé S. and Roland E.

Beyond the grief of her family and her two fellow travellers, Blessing’s death led to a public outcry, as it materialised civil society’s fears that the militarisation of the Alpine border might endanger the lives of transiting migrants. Blessing Matthews’ death was the first documented case of a migrant dying in the region of Briançon since border controls were re-established at the border with Italy in 2015. Two more people have died in the region since.

On 14 May 2018, Tous Migrants, an NGO defending migrants’ rights of based in the region, sent a report concerning Blessing’s death to the Gap public prosecutor, outlining the facts reported by one of the two fellow travellers who accompanied her on the day of her death. This report was followed by a legal complaint filed on 25 September 2018 by one of Blessing’s sisters, Christiana Obie, to the Gap public prosecutor for “endangering the life of others” and “manslaughter”.

On 3 May 2019, Blessing’s sister and Tous Migrants filed a new civil suit. On 18 June 2020, the Gap court declared the complaint inadmissible and dismissed the case ab initio. The order of the investigating judge was confirmed by the investigating chamber of the Grenoble Court of Appeal on 9 February 2021.

To date, the judicial process has failed to shed light on the circumstances that led to Blessing’s death, or to determine who was responsible for it. However, Blessing’s family has not given up its quest for truth and justice. In the words of Christiana Obie, “my sister will continue to scream” until the truth is known and justice is done.

It is to support the demand for truth and justice of Blessing’s family’s that Border Forensics has conducted a counter-investigation, in collaboration with Tous Migrants and thanks to the fundamental testimony of one of her fellow travellers, Hervé. But the stakes of our investigation go well beyond this specific case. The death of Blessing is only one of 46 deaths recorded at the French-Italian border since 2015. No responsibility has been established so far for any of these deaths. The practice of endangering migrants’ lives at the border has thus been allowed to continue unchallenged. We hope that this investigation will contribute to ending this impunity, and to put an end to these practices.

Through a reconstruction of the events in space and time, based on the confrontation of multiple sources of data and evidence, we have reconstructed as precisely as possible the events leading up to Blessing’s fall into the Durance, which had been blurred by the omissions and contradictions of the judicial police investigation.

Our analysis was carried out in several stages and by combining different methods, each of which revealed new elements concerning Blessing’s death.

First, we analysed the political and legislative context and the border control practices in the Alps which shaped the conditions of Blessing’s death. First, we synthesised the scientific literature and the reports of associations. In addition, Sarah Bachellerie and Cristina Del Biaggio created a database of cases of migrants who died while trying to cross the borders cutting across the Alpine territory, and analysed a database of pathologies documented among migrants in the Briançon region.

Our research shows that 87 people have died crossing the Alpine borders since 2015, when the Alpine states closed their Schengen internal borders. We also note that the French-Italian border is the deadliest within the Alpine space, with 46 deaths identified. Furthermore, we show that the danger to which migrants are subjected tois also measured in a large number of pathologies identified in connection with border crossings. Finally, our research shows that in the area of Briançon, police practices that violate the rights of migrants and endanger their lives  (chases, physical and verbal violence at the border crossing point in Montgenèvre) were particularly recurrent in the months and weeks preceding and following Blessing’s death. Our analysis of practicescontrol and their effects indicates that Blessing’s death is not an isolated event, but the result of a conjuncture of political decisions and police practices that endanger migrants from the “Global South” in their crossing of the Alpine borders.

Secondly, on the basis of the precise elements noted by Tous Migrants in the criminal file and which they then transmitted to us in the form of notes, we analysed the statements of the gendarmes mobile who were patrolling La Vachette on the night of Blessing’s death. These gendarmes were, along with Blessing’s two travelling companions, the last people to see her alive. We verified the plausibility of the elements described in their statements in space and time, by reconstructing them in the village of la Vachette and then mapping them, which enabled us to detect numerous contradictions.

While the judicial police investigation constructed a homogeneous narrative from the gendarmes’ contradictory statements and concluded that they had done everything possible to “keep [Blessing and his companions] out of the danger zone”, we demonstrate that the gendarmes’ statements contradict each other, and that the events they describe are inconsistent with the constraints of space and time. Moreover, contrary to what the results of the criminal investigation claim, the gendarmes’ accounts do not enable us to exclude the possibility that they endangered Blessing.

Thirdly, we went to La Vachette with Hervé S., one of Blessing’s fellow travellers who was at her side during what he describes as a chase, until Blessing fell into the river. This direct witness was not heard in the judicial police investigation. His testimony is accurate and consistent, and is corroborated by several other testimonies as well as material evidence. It sheds a fundamentally new light on the events leading up to Blessing’s death, and contradicts both the statements of the gendarmes and the conclusions of the criminal investigation. It describes for the first time the circumstances and location of her fall.

Hervé declares that he saw the gendarmes chasing Blessing through a garden on the right bank of the Durance, until she reached the impassable boundary of the river. Then he saw a gendarme grab her arm and, as she tried to free herself from his grip, she fell into the water. After she fell, according to Hervé, the gendarmes stayed in the garden without helping her.

We conclude with a synthesis of the new elements brought by our counter-investigation to the understanding of the circumstances of Blessing’s death:

Our analysis discredits the conclusions of the judicial police investigation that led to the closure of the judicial proceedings. The new evidence we present indicates that by pursuing Blessing, the gendarmesmay have put her in danger, leading to her fall into the Durance and her death.

This analysis lends support to request to reopen the investigation, a step which is essential to definitively establish the sequence of events that led to Blessing’s death and to determine those responsible it. 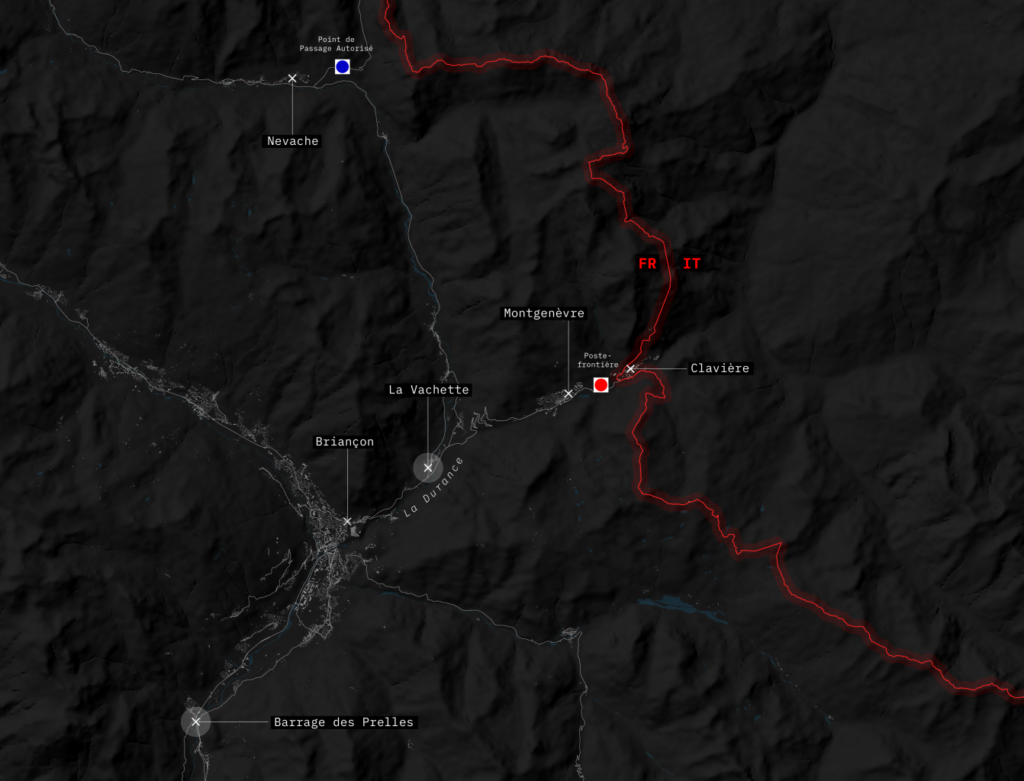 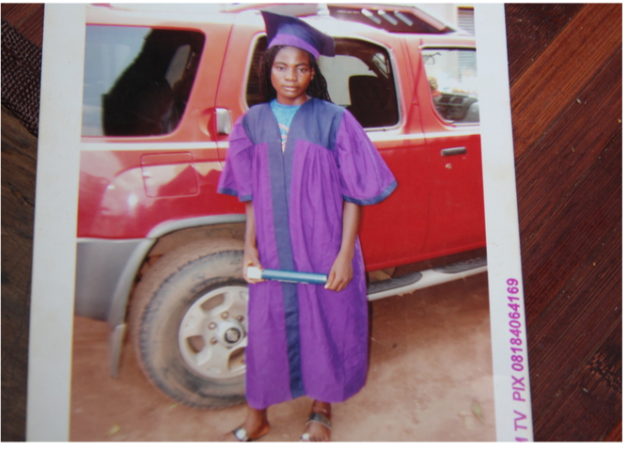 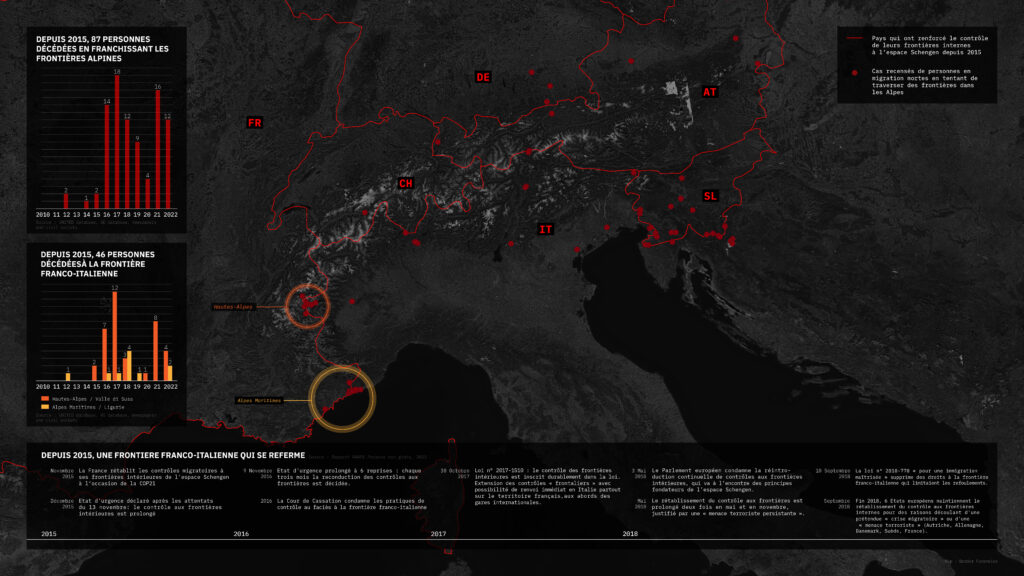 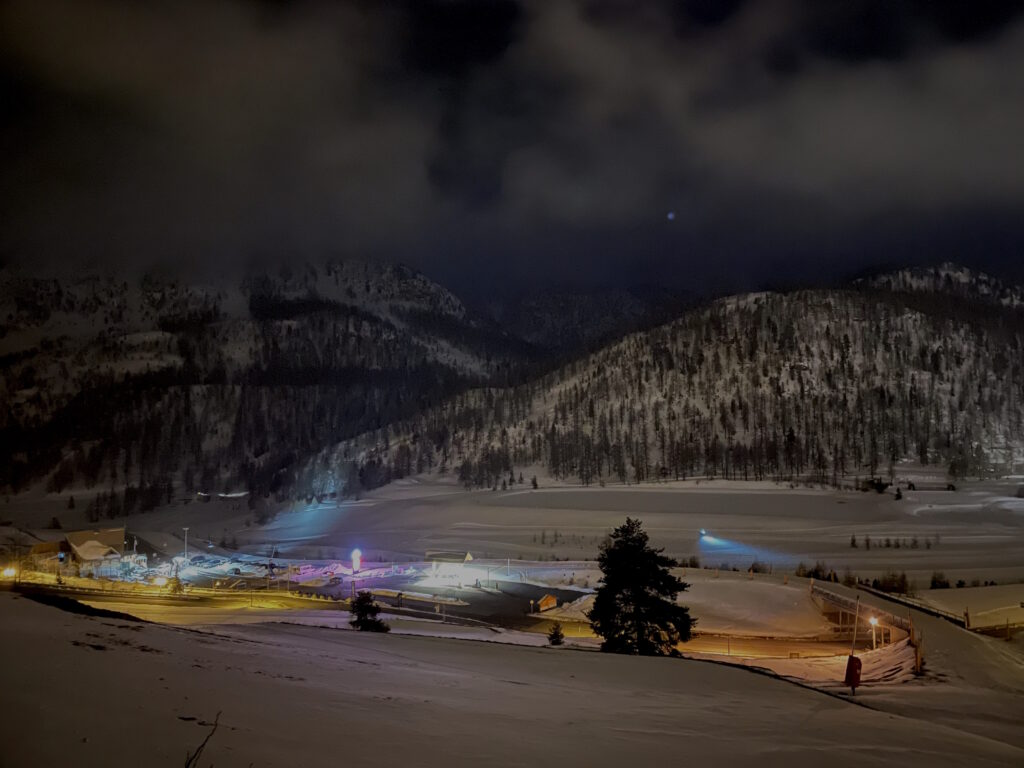 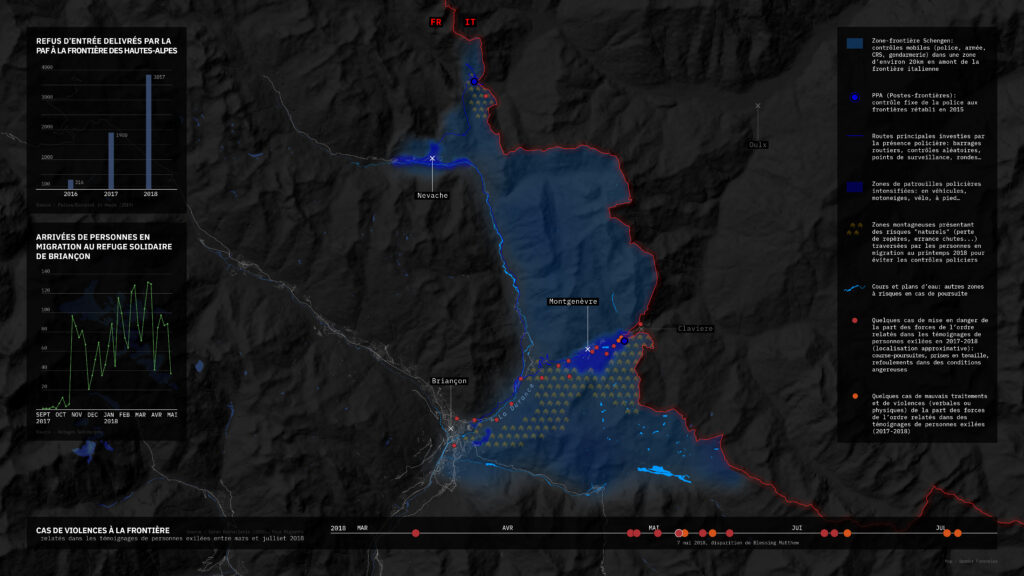 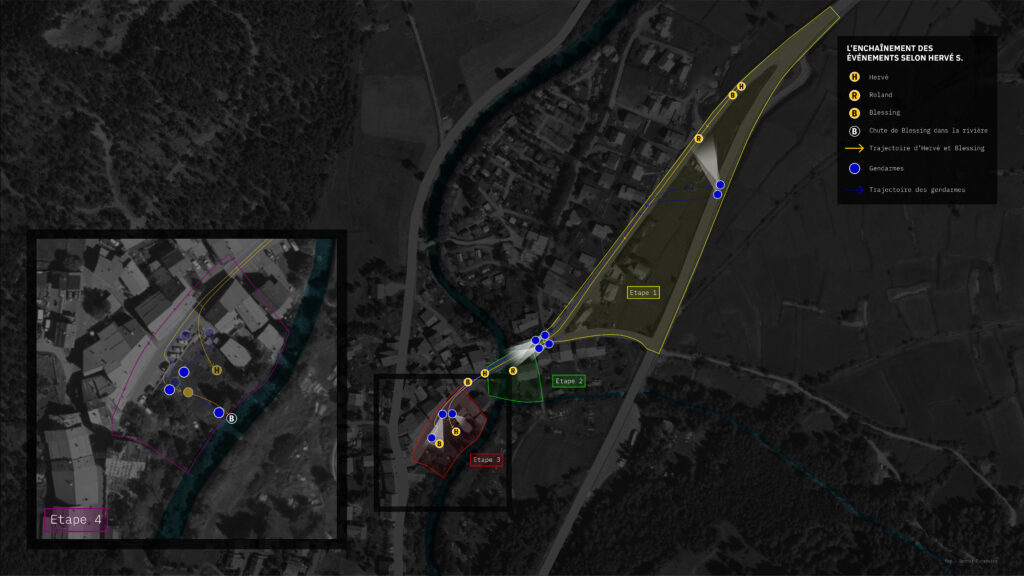 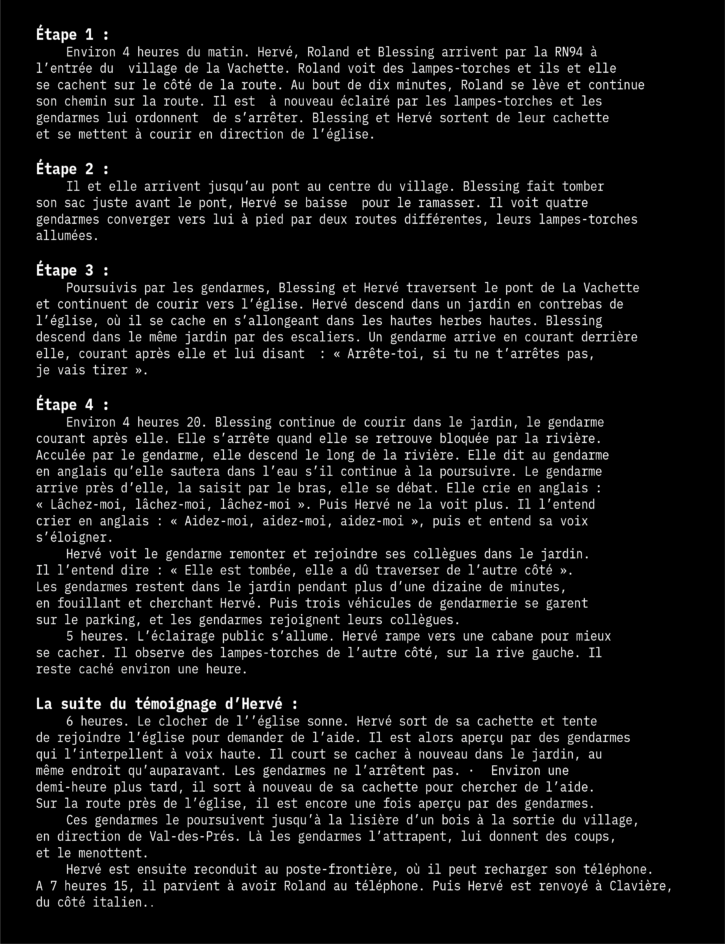 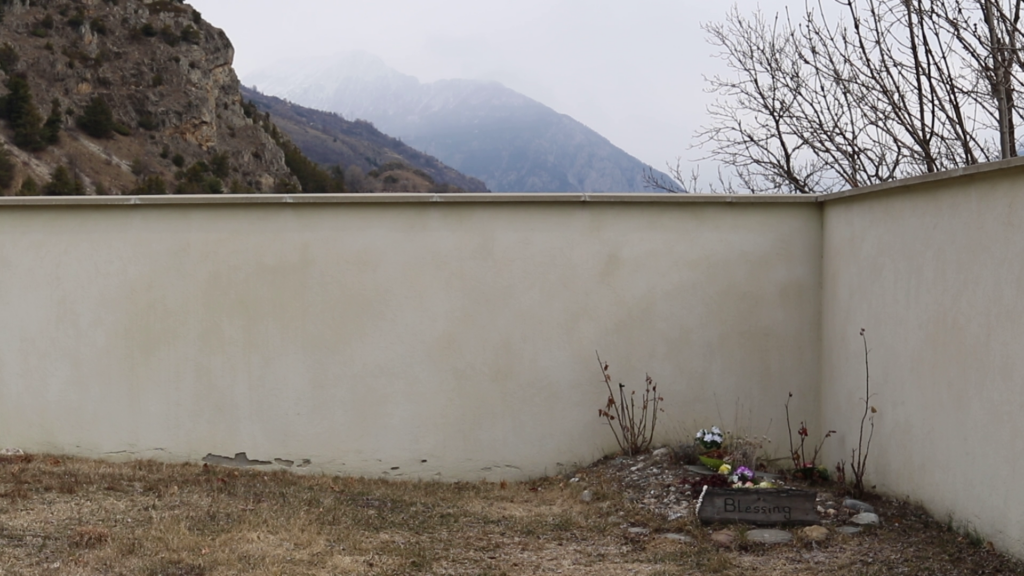